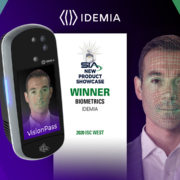 IDEMIA, a company created from the merger of Oberthur Technologies and Morpho, has become the market leader in biometrics security. This French company is not about to stop.

Since the sanitary crisis emerged in early 2020, the notion of hygiene has become an additional reason to ensure the safety and security of individuals. IDEMIA realized that Contactless technology was in demand.

In 2014, IDEMIA launched an amazing contactless solution: the MorphoWave Compact. This biometric reader is designed to read four fingerprints on the fly in less than a second. It was chosen by IDEMIA to secure access to its headquarters in Paris-La Défense. Indeed, this contactless system is fast, precise and hygienic.

Facial recognition, another contactless technology has had an increasing demand in the last few months, which is a real opportunity in the security market. And, IDEMIA is not to be outdone, since it has just released solution for that: the VisionPass. This robust and reliable contactless biometric reader is able to provide near –motion 1 second verification, through multiple angles and in all light conditions.

Visionpass has associated Artifical Intelligence and facial recognition algorithms with a state of the art optical solution combining 2D and 3D cameras. Visionpass resists all kinds of stacks and spoofing attempts, answer the needs of the most demanding customers and institutions.

To have presence in strategic places is the strength of the group, such as the Lyon-Saint Exupéry airport. Passengers can use their facial photos, their ID documents and the barcode on the boarding cards, to generate a biometric template, which will allow them to be identified at the boarding gates. And, the user experience is clearly improved.

Working with major security actors such as the FBI and Interpol, through the Augmented Vision based on facial recognition is another important strength of IDEMIA, which could be used to find a targeted individual in a crowd of people after an attack, for example.

Eventually, IDEMIA would work on the storage of biometric data in smartphone, which could allow people to access the stadiums for the 2024 Olympic Games.