You are here: Home1 / fingerprint identification 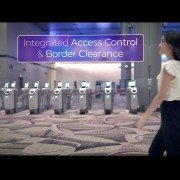 As biometrics turn to be the imperative feature in airports all over the world, a question surrounding the move from authentication to identification is asked quite often. Should airports move from 1:1 to 1:N? Passengers ask for a seamless travelling experience and on the other hand airports like it.

How has the airport experience changed with the advent of biometric technologies?

Everyone who has travelled in airport knows that each company and airport has its own way to serve the customer, varying enormously from how they verify identity, information and how they follow procedures. This is a point-by-point approach, which is the norm nowadays, the idea with biometrics technology is to simplify this approach to a connected approach, seamless and shared: A common biometric database allowing an interexchange of identities’ information and verified travels between airlines and airports is a key point for a maximum of effiency, fast and soft experience to travelers, airports and border control.

IDEMIA as the world leader of augmented identity knows how to make this swift for airports and airlines to improve operational workflow and operability .

What is authentication and identification in biometrics?

IDEMIA has both solutions to handle customer’s needs.

Are there privacy issues that must be overcome if airports have to continue to embrace this idea of seamless flow?

A strong data privacy is demanded while handling citizens’ data,  the travel industry will have to adapt to the evolving regulation.

With long experience on biometric field, IDEMIA provides support in order to facilitate the understanding and clarify the questions of a Privacy Impact Assessment (PIA) needed by GDPR. 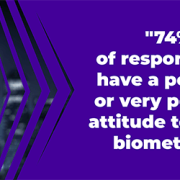 IDEMIA, the world leader in biometrics and augmented identity carried out an independent survey in 11 countries. This survey reached out 2,800 respondents who talked about their perception of biometrics.Here are the some facts collected:

Biometric authentication is seen as a useful technology, reducing numbers of passwords, avoiding fraud and after all it’s easy to use, since you just need to punch in your biometric data. These were the answers of 74% of respondents who had a positive approach to the technology.

90% of people surveyed said they are ready to use biometric identification and that the world is ready for this type of processes. 61% would use biometrics to unlock their phones and others saying that they would pay online and in store with their biometrics.

The lack of human touch and the technical side of biometrics itself were well accepted, meanwhile, the idea of identity theft, fraud and privacy concerns raised some concerns to the people surveyed.

Only 22% of respondents have never tried biometric authentication before. In contrast 78% had already use biometrics and 63% used fingerprint verification.

The most accurate and convenient form of biometric is by far the fingerprint. Second place for security and accuracy is iris recognition and facial recognition wins beside fingerprint the title of convenience.

89% of Brazilians interviewed had used biometric technology, in first place because it’s required to vote in the national election. The U.A.E also have an excellent perception of biometrics, 81% appreciate the innovation and the fun aspect. They are the less fearful of fraud or data or identity theft.

In general, French people participating in the survey had a favorable approach towards biometrics, 61%, a low numbers if we compare to the global average of 74%. The fewest numbers of adherents of the mobile wallet are in France.

The majority of respondents, 82%, want to replace PIN or banking password with their fingerprint. By contrast, 87% want to keep it as a backup option.

When speaking about payment cards with biometric technology, answers are mitigated:

Most of them would prefer to enroll their biometric data with the banking app, 42%, or with help of a bank staff, 67%. Majority as well prefer to keep in their cards the biometric data, 40%, instead of having it stored in the cloud; 11%.

43% of respondents are already using their biometric data to pay with mobile phones. However, there is a huge regional divide with India leading with 86% versus only 11% in France.

IDEMIA is a pionner in the biometric world, with its payment card solution F.CODE – your  fingerprint is turned to your PIN and groundbreaking programs IDEMIA executed the ambitious Aadhaar program in INDIA, attributing an unique ID number to 1.3 billion citizens. At Singapore’s Changi Airport, precisely in the Terminal 4, passengers can board in under 10 minutes using their biometric data.