You are here: Home1 / Company2 / Partnership between IDEMIA and Bosch Building Technologies: a $ 1 billion... 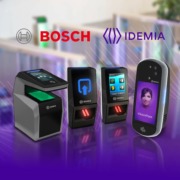 Recently, IDEMIA indicated that it has entered into a global partnership with Bosch Building Technologies, a world leader in the security market. This partnership will exploit the rapidly expanding biometric access control market. According to some specialists, this market, already estimated at $ 1 billion, should grow twice as fast as for other access control markets and reach $ 1.4 billion in 2024.

How to explain such a boom?

Many companies have realized the importance of security in their premises. Since identification badges can be easily falsified, duplicated or stolen, companies are increasingly deciding to use more secure technologies: this is the case with biometrics. Indeed, it uses personal, physiological and tamper-proof characteristics, and increasingly attracts companies for the security of their professional premises.

Bosch Building Technologies called on IDEMIA to integrate a biometric dimension into its BIS (intrusion system) system. The world leader has therefore opted for two types of readers: the MorphoWave Compact, the only terminal that can scan and identify 4 fingerprints in less than a second by a simple movement of the hand, and the VisionPass, whose technology is based on the facial recognition (2D, 3D and infrared cameras). Robust and powerful, MorphoWave and VisionPass are contactless and work even when wearing a sanitary mask. In addition to making the passage smoother and making the places safer, these readers are therefore perfectly suited to the health rules currently in place for the fight against Covid-19.

Biometric readers: products at the cutting edge of technology
Scroll to top